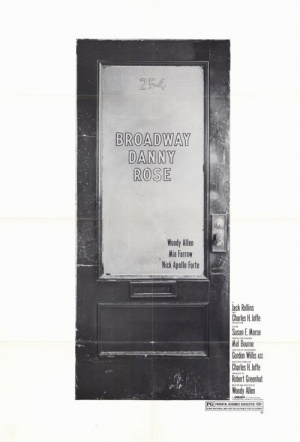 Woody Allen's 1984 comedy gem. He plays Danny Rose, a low-rent talent agent specialising in truly bad acts, who finds unexpected success representing a washed-up singer (Mia Farrow). However, success has complications, particularly when Danny tries to cover for the singer's affairs and as a result ends up hunted by the mob.

Allen's perfect as a small-time, good-hearted Broadway talent agent, giving his all for a roster of hopeless clients.

The jokes are firmly embedded in plot and characterisation, and the film, shot by Gordon Willis in harsh black-and-white, looks terrific; but what makes it work so well is the unsentimental warmth pervading every frame.

Even the swamps of New Jersey look beautiful.

All of this is accomplished with wonderfully off-the-wall characterizations.