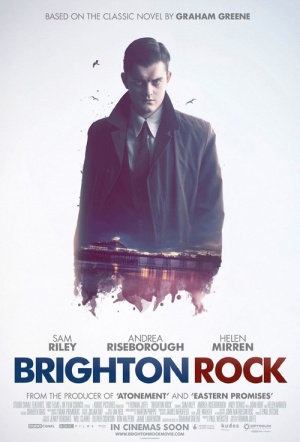 Crime-drama based on Graham Greene's novel that follows the misadventures of a razor wielding sociopath, the woman who loves him and the woman who wants to bring him to justice.

Updating Greene's text from the 1930s to the 1960s and utilising the mod vs rocker riots as its backdrop, Brighton Rock follows murderer Pinkie (Sam Riley, Control), who courts and then marries the only witness to his crime in order to stop her from testifying against him. As Pinkie covers his tracks, Ida Arnold (Helen Mirren), a friend of the murder victim, begins relentlessly tracking him down...

The film looks wonderful with moody lighting, haunting cinematography and affecting music score, but the characters are jumbled and confusing in Rowan Joffe's directing debut

It's always hard to redo a film when another version exists that's deemed a classic.

Enough is done right to make you wish they’d made better decisions and everything looks good in this colour noir… but the central relationship lacks conviction.

Greene fans will raise a sceptical eyebrow, but it's an adaptation brimming with enough ideas to justify this second stick of Rock.