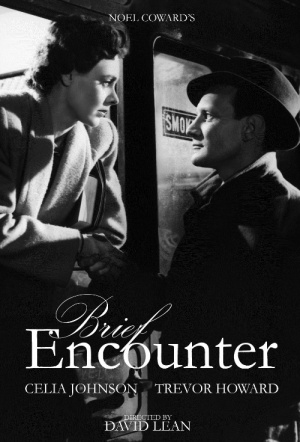 Classic 1945 romance starring Celia Johnson in an Oscar-nominated role as a married woman who struggles with the temptation of cheating on her husband with a charming doctor. Also nominated for Best Screenplay and Best Director at the 1947 Academy Awards.

"It's a passionate romance, as exciting in its way as something by Hitchcock - and, in fact, the climactic tilting-camera shot of Celia Johnson, contemplating suicide as her world topples, is very disturbing. Only those with a heart and brain of stone could fail to be moved...

"The film is thrillingly, unapologetically about decency and honour, about, as Laura heartrendingly puts it, controlling oneself. The eroticism that we might expect now from such a story has been displaced into idealism and self-denial. And in its very remarkable final speech by Laura's husband Fred - a lovely performance from Cyril Raymond - Coward makes the case for not talking about things." (The Guardian)

The film is thrillingly, unapologetically about decency and honour, about, as Laura heartrendingly puts it, controlling oneself.

This account of a passionate yet unconsummated relationship between a married woman and a married doctor created a great impression both here and abroad.