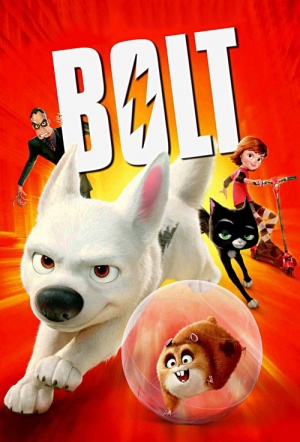 This is the super-duper 3D version of Bolt (the one you should be seeing, in our opinion).

For super-dog Bolt (voiced by John Travolta), every day is filled with adventure, danger and intrigue – at least until the cameras stop rolling. When the canine star of a hit TV show is accidentally shipped from his Hollywood soundstage to New York City, he begins his biggest adventure yet – a cross-country journey through the real world. Armed only with the delusions that all his amazing feats and powers are real, and with the help of two unlikely traveling companions – a jaded, abandoned housecat named Mittens (voiced by Susie Essman), and TV-obsessed hamster in a plastic ball named Rhino – Bolt discovers he doesn't need superpowers to be a hero. Miley Cyrus (Hannah Montana) brings her vocal talents to the role of Penny, Bolt's human co-star on the television series.