Do Androids get as sentimental as Hollywood?

Trying to breathe enough life into a simple idea to make a sequel is tricky. The new idea is quite clever but the execution seemed to lack thought. If the pacing was faster, we the audience might not notice the plot holes but Blade Runner 2049 takes a slow and measured approach and then puts the brakes on in the third act giving us far too long to think about the plot.

In this movie there is rarely any doubt who the replicants are. While there is plenty of violence there is very little shock value. Despite being a violent, dystopian, sci-fi film about the LAPD and androids it gets increasingly sentimental, climaxing in the final scene. There are more female characters among the antagonists and the supporting cast but also a stronger sense of women (real and virtual) existing largely for the sexual pleasure of men.

The mise-en-scène follows nicely on from the first movie, with what looks like a bigger budget. Like the original one, this film will stay in the mind longer than most due to its visual impact. 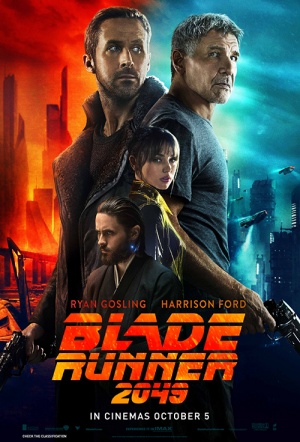