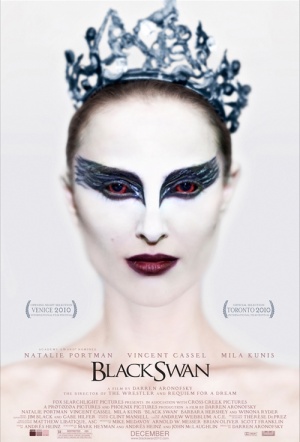 A psychological thriller from Darren Aronofsky (director of The Wrestler and Requiem for a Dream). Follows the story of Nina (Natalie Portman in an Academy, BAFTA and Golden Globe winning performance), a ballerina in a New York City ballet company whose life is completely consumed with dance.

When artistic director Thomas Leroy (Vincent Cassel) decides to replace prima ballerina Beth MacIntyre (Winona Ryder) for the opening production of their new season, Swan Lake, Nina takes centre stage. But there's competition: new dancer, Lily (Mila Kunis). Swan Lake requires a dancer to play both the White Swan with innocence and grace, and the Black Swan who represents guile and sensuality. Nina fits the White Swan role, but Lily is the personification of the Black Swan. As they expand their rivalry into a twisted friendship, Nina gets in touch with her dark side with a recklessness that threatens to destroy her.

A wicked, sexy and ultimately devastating study of a young dancer's all-consuming ambition, Black Swan serves as a fascinating complement to Darren Aronofsky's "The Wrestler," trading the grungy world of a broken-down fighter for the more upscale but no less brutal sphere of professional ballet.

The most toxic, rapturous, melodramatic, operatic movie about a mentally disintegrating ballerina you’ll see all year… And featuring some of the best dance sequences ever.

Black Swan is visceral and real even while it's one delirious, phantasmagoric freakout.

A full-bore melodrama, told with passionate intensity, gloriously and darkly absurd. It centers on a performance by Natalie Portman that is nothing short of heroic.

Indeed, White Swan/Black Swan dynamics almost work, but the horror-movie nonsense drags everything down the rabbit hole of preposterousness.

An extraordinary, intoxicating movie. Its hard, twisted edges may turn off some, but there's no faulting either Aronofsky's technical mastery or Portman's flawless performance.

Director Darren Aronovsky has a way with the grand gesture and the doomed protagonist. In Pi he had his lead character drill a hole in his own head, rather than spend another day tormented by being so good at maths.