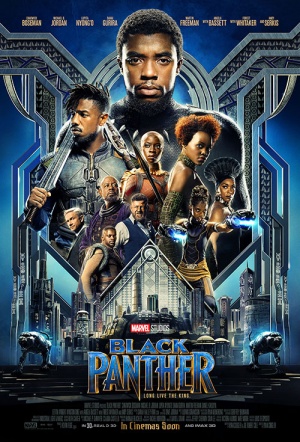 When Black Panther's leadership is threatened by two of his foes who join forces, he must fight back along with the C.I.A. and the Dora Milaje. Erik Killmonger (Michael B. Jordan) has been revealed to be one of said foes.

Celebrates its hero's heritage while delivering one of Marvel's most all-around appealing standalone installments to date.

Most big studio fantasies take you out for a joy ride only to hit the same exhausted story and franchise-expanding beats. Not this one.

The intriguing thing about Black Panther is that it doesn't look like a superhero film - more a wide-eyed fantasy romance: exciting, subversive and funny.

Its execution is well-realised by Creed director Coogler, but this Black Panther doesn't unfortunately quite roar when it should...

Could Black Panther be any more exciting? Yes.

We didn't know we'd been yearning for it until it arrived, but now that it's here it's unmistakable that the wait for a film like "Black Panther" has been way longer than it should have been.

With uncanny timing, Marvel takes its superheroes into a domain they've never inhabited before and is all the better for it in Black Panther.

A giddily enjoyable, convention-bucking 134-minute epic that somehow manages to simultaneously be a comic-book blockbuster, a pulsating espionage thriller and an Afro-futurist family saga.