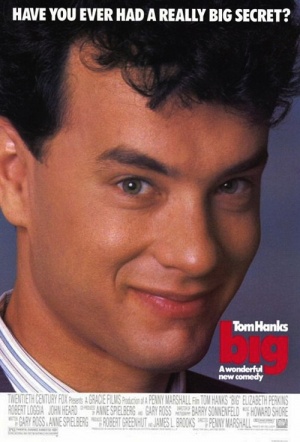 Family comedy classic with Tom Hanks, in a star-making performance, as a young boy living in the body of a man who charms his way to the top of a toy company. Named the 10th best fantasy film ever by the American Film Institute in 2008.

Frustrated with the lameness of childhood, 12-year-old Josh (David Moscow) makes a wish to be "big" to a fairground slot machine. The next morning he wakes to find his exterior transformed into that of a 30-year-old man (Tom Hanks). Unable to stay at home (his mum thinks this strange man has kidnapped her son) he goes to New York City to lay low and to locate the slot machine.

There, his ability to get inside the mind of a child is identified as financial gold by the owner of the MacMillan Toy company (Robert Loggia). Rocketing up the company ranks, Josh is soon struggling with all the complexities of the adult world as well as trying to find a way to return home.

Unspools with enjoyable genuineness and ingenuity.

For any other full-grown actors who try their hands at fidgeting, squirming, throwing water balloons and wolfing down food in a huge variety of comically disgusting ways, this really is the performance to beat.

Then the film is sprinkled with a particularly movie kind of magic — a succession of simple, joyous moments that lift off the screen and into the consciousness like stolen treasure.

This is mainstream Hollywood filmmaking at its best -- packed with intelligence, humour and pathos.