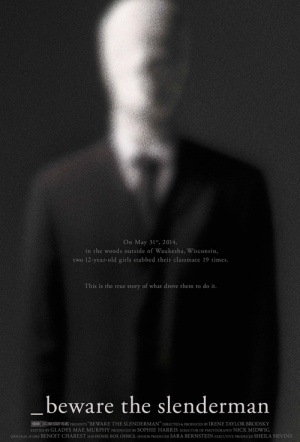 From a Creepypasta internet scare to viral phenomenon, The Slender Man cast a sinister, if harmless, shadow - until two 12-year-old girls stabbed their best friend to appease the fictional entity. This documentary explores the horrifying crime.

"Beware the Slenderman tells the story of the internet’s elusive Boogeyman and two 12-year-old girls who would kill for him. Morgan Geyser and Anissa Weier lured their best friend into the woods, stabbed her 19 times, then set out on an odyssey to meet the tall and faceless man known online as Slenderman. Shot over 18 months with heartbreaking access to the families of the would-be murderers, the film plunges deep down the rabbit hole of their crime, a Boogeyman and our society’s most impressionable consumers of media. The entrance to the internet can quickly lead us to its dark basement, within just a matter of clicks. How much do we hold children responsible for what they find there?" (SXSW)