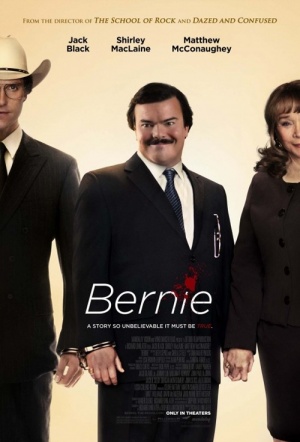 Jack Black reunites with School of Rock director Richard Linklater for this dark comedy about the murder of a wealthy, elderly Texan widow (Shirley MacLaine) by her middle-aged companion (Black). Matthew McConaughey plays the local DA. Based on a true story.

Bernie is a portly, well-liked mortician in small-town Texas who befriends cantankerous widower Marjorie. After killing her (shooting her in the back with a rifle) for financial gain, he goes to great lengths to make it appear she is still alive. When Marjorie's body is eventually discovered and DA Danny Buck Davidson starts pointing the finger at Bernie, the towns residents rally to his defence.

Bernie, a triumph of small-scale, regional pulp, doesn’t quite operate as a menacing thriller, nor as a one-note yokel comedy.

No use trying to describe Bernie. It's a one-of-a-kind inspiration. You will never feel closer to a convicted killer.

I had to forget what I knew about Black. He creates this character out of thin air, it's like nothing he's done before, and it proves that an actor can be a miraculous thing in the right role.

A splendid performance by Jack Black distinguishes this overly mild look at a 1990s Texas murder.

Though the lightness of Bernie can get disconcerting at times, even cartoonish, Linklater approaches the story with a bemused curiosity that seems about right under the circumstances.