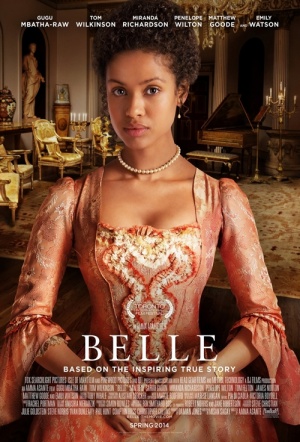 "Fans of English period drama are accustomed to its gorgeous settings, social graces, and sophisticated language. But what's often missing from those adaptations of Jane Austen or the Brontës is the institution at the foundation of that refined life: slavery...  In late eighteenth century England, Belle is born to a white British admiral and a black Caribbean slave. The admiral's well-bred family is appalled, but when he returns to sea, custom dictates that they raise his child as an aristocrat. Britain's imposing Lord Mansfield (Wilkinson) is both Dido's uncle and the family patriarch, and instructs this biracial young woman to respect both the law and the social codes of her station. She is a lady, but an embarrassment." (Toronto International Film Festival)

In a tale of 18th-century aristocratic English society so unlikely it could only be true, Belle, the illegitimate daughter of an English Naval officer and an African mother, is shipped to England to live with her father’s uncle, Lord Mansfield. Belle’s dark skin precludes her dining alongside her aristocratic kin, but that doesn’t stop her circulating after meals, generating shock and amusement as guests realise Lord and Lady Mansfield (delightfully played by Tom Wilkinson and Emily Watson), have a “mulatto” in their midst.

Fascinating insights into the conflicted mindset of British society.

The movie seems to exist to give its white characters belated moments of conscience.

A handsome if uneasy blend of history and courtship drama.