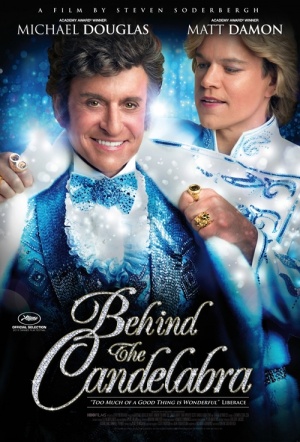 Flamboyant pianist, singer and showman Liberace was the world’s highest-paid entertainer from the 1950s to the 1970s. Behind the Candelabra focuses on the secret and tempestuous five-year affair between Liberace (Michael Douglas) and his driver Scott Thorson (Matt Damon) - a heady mix of drug addiction, promiscuity, surreal plastic surgery, sequins and a $US113 million palimony lawsuit.

Directed by Steven Soderbergh and based on the biography/memoir written by Thorson. Soderbergh's final film before retiring, he told Yahoo that Behind the Candelabra was turned down by every major Hollywood studio - "They said it was too gay". HBO Films eventually produced the movie.

Behind the Candelabra / Reviews

Banished to HBO in its native America for being “too gay”, Steven Soderbergh’s Liberace tell-all is actually scrupulously careful not to offend anyone: like Boogie Nights making nice.

Re-creates the lavish living environment and stage shows Liberace orchestrated between 1977 and his death in 1986 of HIV-related complications, while presenting the world with a sort of worst-case version of predatory homosexuality, in which an older man of means identifies, seduces and eventually tosses aside a naive, cornfed young country stud.

Douglas pulls out all the stops while - somehow - avoiding caricature in a glittering celebrity portrait. If Soderbergh's swansong doesn't always mine great depths, it gives fabulous surface.

It's both a romp and uncomfortably real.

One of the most stylish movies Soderbergh has made in years. This is very much Scott’s version of the story, so Soderbergh employs subtle and overt subjectivity in his camerawork...

A wonderfully entertaining and revealing look at Liberace’s final decade.

Who'd have thought Michael Douglas and Matt Damon would make such an astonishing, convincing on-screen couple? Steven Soderbergh, that's who...

The story is told less as a cause-and-effect narrative than as a collection of incidents that add up to something with a crushing emotional weight.