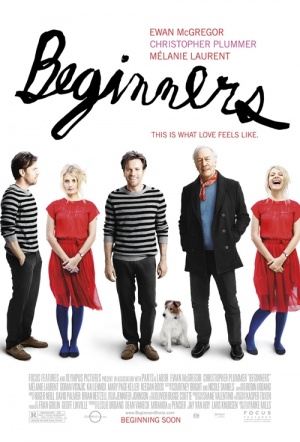 Ewan McGregor, Christopher Plummer and Mélanie Laurent star in this comedy-drama about a young man rocked by two announcements from his elderly father: that he has terminal cancer and that he has a young male lover.

Oliver (McGregor) meets the irreverent and unpredictable Anna (Laurent of Inglourious Basterds) only months after his father (Plummer) has passed away. This new love has Oliver reflecting on his father who, following the death of his wife of 45 years, came out of the closet at age 75 to live an energized, and tumultuous gay life – which included a younger boyfriend, Andy (Goran Visnjic, ER).

From writer/director Mike Mills (Thumbsucker), who based this story on his own father.

"They f** you up, your mum and dad" appears to be the underlying message of Mike Mills’ Beginners, a tragicomedy that also suggests the parents aren’t entirely to blame. Through the intimate portrayal of two love stories emerges a bigger picture of society’s expectations, a reminder of the consequences of repressed homosexuality.

A beautifully judged and genuinely affecting exploration of life’s constant capacity to surprise.

The love feels heartfelt but it’s difficult loving other people, a hardship that’s evident in the happy-tearful faces, the tentative touches and searching glances that make this movie, or maybe all its yearning, so appealing.

One of the pleasures of Beginners is the warmth and sincerity of the major characters.

The movie darts, dreams, and sometimes seems to dance.

With good performances and characters, Beginners is an enjoyable, amusing and occasionally poignant watch.