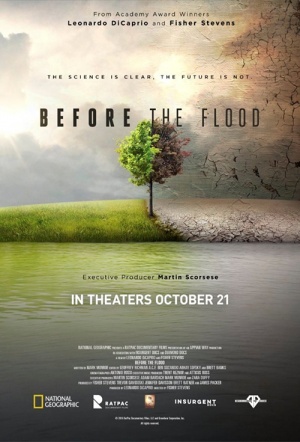 "From the toxic tar sands of Alberta to the frequently flooded streets of Miami Beach, from the smog-choked avenues of Beijing to the incinerated forests of Indonesia, DiCaprio meets with scientists, politicians, and activists to face the facts: natural disasters are becoming more frequent, wildlife is vanishing, communities are being destroyed. What is to be done?" (Toronto International Film Festival)

Before the Flood / Reviews

Flood's filmmakers are intelligent in their use of the biggest asset they have: Not only do they keep their movie star onscreen, they work hard to tie viewers' concern for the environment up with his biography.

Before the Flood isn't simply interested in showing how terrible everything is. It also does a fantastic job of highlighting solutions for climate change, both short-term and long-term.