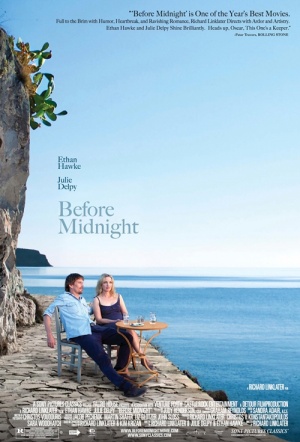 Director Richard Linklater revisits distant lovebirds Jesse and Celine (Ethan Hawke and Julie Delpy) in Greece, nine years after being reacquainted in Before Sunset (2004) and almost two decades since they first met on the train in Before Sunrise (1995).

After spending the "best summer ever" with him in Greece, Jesse sees his son off back to his mother in the U.S. But as he returns to Celine and their two twin daughters, the global sense of separation begins to weight down on him. Treated to a luxurious seaside hotel by their Greek friends, Jesse and Celine head down for a night of romance while their kids are looked after. But what was intended as an evening of passion – akin to Jesse’s novels – turns into an uncomfortable confrontation as their fears and insecurities begin to surface…

It’s doubtful that anyone cares more for longitudinal love birds Jesse and Celine than Richard Linklater, Ethan Hawke and Julie Delpy, for this third entry in the Before series continues to treat them with devoted dignity, even when life threatens to render their devotion less dignified.

Honoring all that was memorable about its forebears while taking the story to new depths of catharsis, Before Midnight stands as a unique and uniquely satisfying entry in what has shaped up to be an outstanding screen trilogy.

A more-than-worthy, expectations-exceeding chapter in one of modern cinema’s finest love stories. As honest, convincing, funny, intimate and natural as its predecessors.

That’s the subtle level this movie operates on, and by the time it arrives at its powerhouse climax, a ruinous argument in a hotel room where all lingering doubts are finally and furiously outed, there’s nowhere left for them to ramble. They’re pinned down and have to improvise, but this glorious movie has infinite space to roam.

Before Midnight is intimate and intelligent, and also undemanding in the best possible way.

Predictably, it's just as great as the first two.

Though this stage is harder to watch, audiences who have aged along with Celine and Jesse will treasure this new episode.

A bit tarter than its predecessors, but not skimping on their woozy, chatty charm, this perfectly played, gently incisive film is a welcome new chapter in one of cinema’s most beguiling ongoing romances. See it with someone you’ve loved for some time.

A rich, smart, funny, sometimes acidic portrayal of a couple who can be spectacular when they’re in tune — and toxic when they’re at each other’s throats.