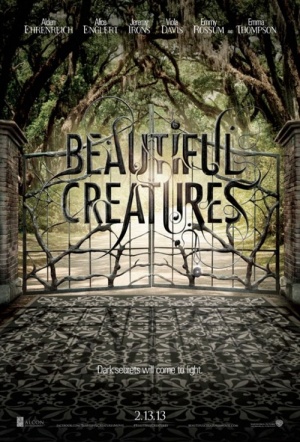 Gothic, supernatural teen romance based on the best-selling fantasy novel, co-starring Emma Thompson, Jeremy Irons and Viola Davis. Set in the American South, this is the story of two star-crossed lovers: Ethan (Alden Ehrenreich), who longs to escape his small town, and Lena (Alice Englert), a mysterious new girl. Together, they uncover dark, black magic secrets about their respective families and town.

The book is the first of the Caster Chronicles series, named by MTV News as one of 2010's 'series to watch'.

Fortunately, writer-director Richard LaGravenese has jettisoned most of the novel and refashioned its core mythology and characters into a feverishly enjoyable guilty pleasure.

As with many young-adult book-to-film series, Beautiful Creatures plays like an illustrated compendium of scenes from the novel, as opposed to a finely tuned narrative all its own.

Beautiful Creatures is good fun and I want to know what happens next for Lena the teenaged witch.

The plot is wildly silly and shot full of holes, maundering endlessly on its slow trawl towards the climax. But the cast at least play it like they mean it, and keep it honest for a spell.

Maybe there really are supernatural forces at work in this world. How else to explain Beautiful Creatures? The movie is an intriguing, intelligent enigma — three words not typically associated with teen romances.

Had this adaptation of the young adult fantasy-romance taken a few more liberties, it might have been a home run.

Beautiful Creatures springs to life whenever Irons, Thompson or Rossum is centerstage. The grown-ups get to wear all the coolest costumes and spout all the juiciest lines. Problem is, this isn't their story. It's first and foremost a semi-plodding teen romance with supernatural overtones.