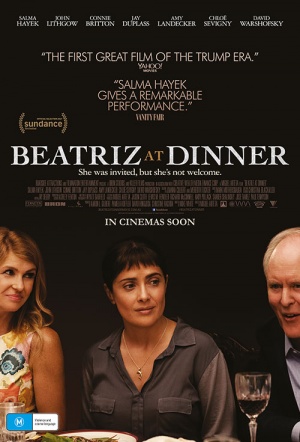 In this dramedy of errors, Salma Hayek is Beatriz, a holistic medicine practitioner who attends a dinner party hosted by a wealthy client (Connie Britton) after her car breaks down. The ensuing culture clash sees working class Beatriz go head to head with guests including a wealthy developer (John Lithgow) on issues of race and privilege. Co-stars Chloë Sevigny and Jay Duplass.

"Beatriz (Hayek), an immigrant from a poor town in Mexico, has drawn on her innate kindness to build a career as a health practitioner in Southern California. Don Strutt (John Lithgow) is a real estate developer whose cutthroat tactics have made him a self-made, self-satisfied billionaire. When these two polar opposites meet at a dinner party, their worlds collide and neither will ever be the same." (Sundance Film Festival)

This might be the best performance Salma Hayek has ever given, her quiet, observant reserve eventually giving way to bewilderment and resolve.

A small-scale but elegantly deft squirmfest that features a luminous performance by Salma Hayek.

It's quite something to watch, and watch it you should. Be warned, though, that Beatriz at Dinner is a bit of a bummer. But there's still something cathartic about it.

The seriousness of its themes in no way detracts from the delight in watching Ms. Hayek and Mr. Lithgow perform their eccentric, intricate dance.

This queasily funny and suspenseful movie is more than a smirking exercise in ideological deck stacking, and to praise it for its political relevance would be to understate its subtlety and specificity.

A flawed work, too broad and scattershot to skewer its deserving targets with the precision necessary for the task.