It's Just Not Good

With ugly rushed animation, poor direction and an incredibly uncomfortable tacked on opening half hour, Batman: The Killing Joke might be the worst piece of DC related film this year and that IS inculding the mess that is Suicide Squad and the dumpster fire that is Batman V Superman.
Though the terrific voice cast of Kevin Conroy, Mark Hammill and Tara Strong are giving it their all (well most of their all. Hammill and Conroy fall flat quite a number of times during this film, including the poignant ending which left me cold) nothing can distract from the fact that the whole thing feels rushed. Adapted from an outdated source material even the original creator wont touch anymore, this film feels like the bastard child of the "Just cause we CAN do it doesn't mean we SHOULD do it " philosophy. With some of the worst animation I have seen in a long time (during one of the films only memorable scenes, when The Joker sings to Jim Gordon to make him go crazy, the background freak dancers twitch like GIFS left unattended) and a creepy, sexist, incestuous opening scene that not only destroys Batgirl as a character (She tries to prove to Batman that she can handle herself, f*cks him and then quits anyway cause she got stressed? Not to mention the added sex makes it seem like the filmmakers are punishing her for it later on when she's shot and implied to be raped) but also turns Batman into a metaphysical arsehole (the funniest part of the whole film is when Batman mansplains to Batgirl that a villain was objectifying her. Quote: BG: Gotta admit it's a little flattering. BM: NO! He was OBJECTIFYING you)
All in all, it's just no good. Too brutal for kids, too creepy for adults. There's just no audience for the film except for the Batbro's who try and get Rotten Tomatoes banned for not being nice to DC Comic's movies.
This is not a good movie. Don't bother. Re watch The Dark Knight instead. 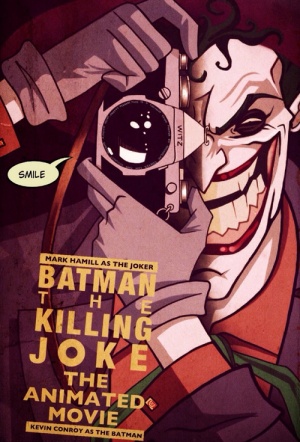