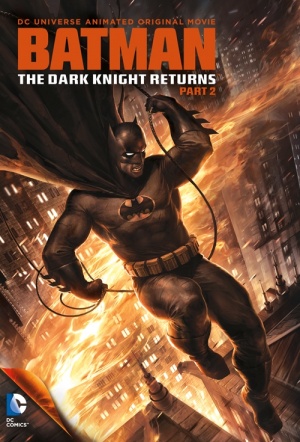 DC Comics/Warner Bros., two-part animated movie based on the comic book series The Dark Knight Returns by Frank Miller. The story arc sees Batman return from a ten-year retirement, join forces with a female Robin, take on Two-Face, the Joker and ultimately Superman in a battle that only one will survive.

Following directly from Part 1, The Dark Knight - along with new sidekick Robin -has reclaimed Gotham City and allowed a ray of hope to penetrate the reign of terror cast by The Mutants. With Batman back in the spotlight, the extended media coverage has awoken a far worse evil at Arkham Asylum - the Joker. As a global catastrophe races towards Gotham, with it comes Superman. But the Man of Steel, unsure which side of the law Bruce Wayne is coming down on, has Batman in his sights.