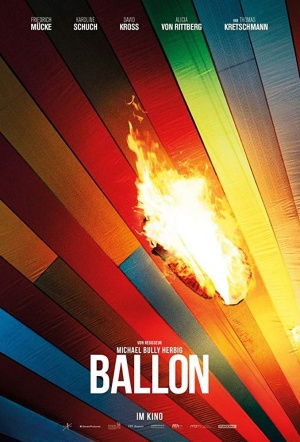 Two families attempt to escape across the East German border during the Cold War in a hot air balloon in this German true story drama-thriller.

"The summer of 1979. Families Strelzyk and Wetzel want to escape Eastern Germany and delve into the freedom of the West. The two families have forged a daring plan: in a self-constructed hot air balloon, they want to fly across the border at night. When finally the weather conditions are ideal, they are ready to set off; however quite a few things go wrong and the balloon crashes just before it reaches the West German border. The Stasi find traces of the attempted escape and immediately begin an investigation, leaving the two families to build a new balloon under immense time pressure. As the Stasi close in with each passing day, a nerve-wracking race against time begins." (Zurich Film Festival)

Quite entertaining, anchored by solid performances, and a contagiously well-meaning spirit.

There is nothing objectionable about (Balloon), but there's nothing particularly exciting about it, either.

Lacking the nail-biting suspense that the story would seem to call for, Balloon quickly deflates.

While handsomely made, (Balloon) undersells the fascinating true story of two families escaping the GDR.

Herbig and his team prove to be especially adept at contriving situations where anything anyone does causes fear... leaving everyone, very much including the audience, existing on the knife's edge of unremitting tension.

The fact that it's based on a true story... does not make up for the amassing of red herrings, close calls, and occasions for head-scratching.

The film is a solid political thriller, with good edge-of-the-seat tension if you don't mind everything slightly over-cooked.

The film's main strength lies in its convincing depiction of what it was like to live under the restrictive totalitarian state that was East Germany.

Herbig directs every scene with an overcranked mania, accompanied by a blaring Zimmer-esque score that thinks it's part of the buildup to a Navy Seals assault on an Indian Ocean pirate ship.