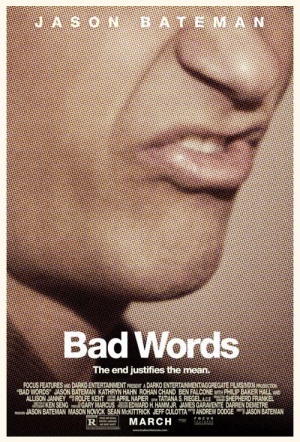 Jason Bateman directs and stars in this comedy about a cranky, foul-mouthed, fortysomething high-school dropout who, through a registration loophole, enters a national children's spelling bee and ruthlessly sets out to destroy his pint-sized competition.

"Trilby (Bateman) slashes and burns through the regionals, then, at the national level, he meets legitimate competitor Chaitanya (Rohan Chand), a seemingly ingenuous boy unfazed by the older man's misanthropic mien. Trilby's motivation for destroying the hopes of thousands of young spellers is finally revealed, but not before he comes up against bee director Dr. Bernice Deagan (Allison Janney), who employs a steely glare that would make Nurse Ratchett quiver. Utilising the same deft timing and strong grasp of emotional motivations that he has exhibited in his numerous winning comic performances of the last decade, Bateman has created a dark, raucous comedy." (Toronto International Film Festival)

Bateman makes an auspicious directing debut with this exuberantly foul-mouthed and mean-spirited comedy.

The performances are funny, appealing and, in the case of Allison Janney, as a spelling bee official, wonderful.

A tart, likable comedy that must have been pitched as "Spellbound meets Bad Santa".