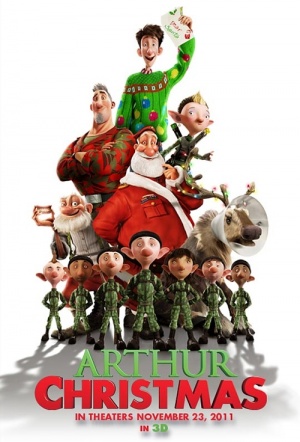 British animated Christmas fantasy from Aardman Animation (Wallace and Gromit, Flushed Away), from the writer of Borat and TV's I'm Alan Partridge.

James McAvoy voices Arthur, the son of Santa Claus (Jim Broadbent) and Mrs Claus (Imelda Staunton), and brother of Steve (Hugh Laurie). Together the family run a high-tech operation in the North Pole that allows Santa to deliver presents to all the world's children in one night.

Also involved is Bill Nighy, who plays 136-year-old Grandsanta, a curmudgeon who hates the modern world and thinks things were better when he delivered the presents, and Ashley Jensen (from TV's Extras, Ugly Betty), who voices ambitious elf Bryony from the Giftwrap Battalion.

There are plenty of ho-ho-hos here, but there’s definitely something missing, and we don’t just mean the plasticine.

An odd Anglo-American collaboration that will bring a little brief happiness to undemanding children.

A joyful, simple Christmas movie with a heartfelt message.

A great, big joy. Even if you’re a bit bah humbug, just delight in the supremely clever Aardman comedy.