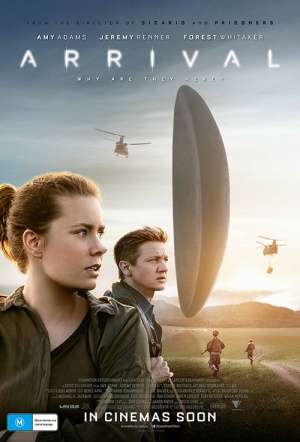 Sicario director Denis Villeneuve casts Amy Adams as an expert linguist enlisted by the US government to investigate and communicate with an alien spacecraft, one of a dozen that have landed on Earth.

Aliens have landed, they aren't humanoid, and they don't speak English - or any of our languages. As countries around the world both cooperate with one another and race against each other for a breakthrough, Louise Banks (Adams), physicist Ian Donnelly (Jeremy Renner) and their elite American team must race against time to find answers.

One day Dennis Villeneuve will make a masterpiece. Incendies (2010) came close as dammit. Prisoners (2013) started strong but twisted when it should have stuck. Enemy (2013) was far too esoteric (read pretentious). And Sicario (2015) was superbly crafted but just shy of world-shaking.

For most of its running time, Arrival is entrancing, intimate, and moving - a sci-fi movie that looks not up at the stars but rather deep within.

You feel you’ve had a close encounter with what might have been an amazing movie, but not actual contact.

A super-smart sci-fi that'll blow your mind and have you on the edge of your seat without recourse to explosions or souped-up fighter jets.

Both heartfelt and very entertaining.

Adams' performance as Dr Louise Banks is terrific. She's the affecting emotional core of this.

Anchored by an internalized performance from Amy Adams rich in emotional depth, this is a grownup sci-fi drama that sustains fear and tension while striking affecting chords on love and loss.

Arrival is Villeneuve's The Day The Earth Stood Still or Close Encounters Of The Third Kind, and somehow he makes it true to the tropes while also feeling like something new.