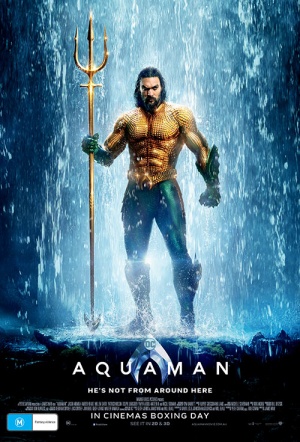 When Arthur Curry (Momoa) learns that he is the heir to the underwater kingdom of Atlantis, he must step forward to lead his people and to be a hero to the world.

It doesn't suck, but only if you're willing to sit through two hours of waterlogged world-building before the movie finally takes off.

Wan has taken a seemingly impossible task and imbued it with clarity and personality.

It feels like a step in the right direction for the DCEU. What's more, its hero's former 'joke character' status is kept well at bay.

Aquaman is more seawater than bongwater, unfortunately, but when it gets trippy, it floats within hailing distance of Doctor Strange.

This is a let-down: a laborious, slow-moving and dripping wet film, barnacle-encrusted with solemnity and with a ripply-underwater production design that looks like a giant version of the kitschy items that you put in fish-tanks.

Aquaman does everything we expect a big-budget superhero movie to do, but it also remembers ... to have a heart, and something other than mere bombast to give us for bothering to show up. Bravo.

It's a big call, but Aquaman - one of the most highly anticipated releases of 2018 - might just be the worst film of the year.

All of it is wrapped up in that much needed wry and irreverent self-awareness which DC just hadn't managed to crack until now.

Notwithstanding the inevitable formulaic dialogue and a superabundance of boilerplate superhero action sequences, "Aquaman" turns out to be, almost despite itself, an engaging undersea extravaganza.

Welcome to Aquaman, where you won't have a clue what's going on, but you won't be able to look away either.