Ant-Man and the Wasp 3D 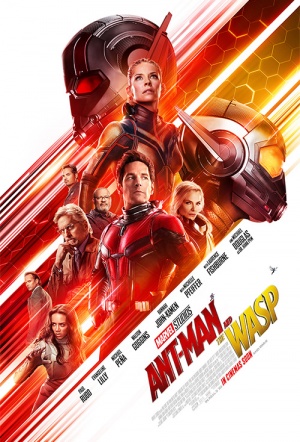 As Scott Lang (Rudd) struggles to rebalance his home life with his responsibilities as Ant-Man, he's confronted by Hope van Dyne (Lilly) and Dr. Hank Pym (Douglas) with an urgent new mission.

Ant-Man and the Wasp 3D / Reviews

The payoffs aren't plot points but the gags, which somehow defuse the tension without turning the picture into camp.

Ant-Man and the Wasp has a pleasingly breakneck, now-you-see-it-now-you-don't surreal glee. It's a cunningly swift and delightful comedy of scale.

It seems pretty nice. Would that we could wrestle the rest of the world down to that same agreeable scale.

A blast of pure popcorn fun, and something of a palate cleanser after the weightier likes of Black Panther and Infinity War.

A chilled glass of lemonade after the peaty top-shelf of Infinity War.

The thrill of the film is watching Ant-Man and the Wasp team up and raise hell together.

A welcome return to a more grounded superhero movie that positively overflows with charm and wit.

You might wish the whole movie had found a way to go quantum; you'll certainly long for more Pfeiffer, who has too few scenes but invests each of them with her usual luminosity.

This latest entry in the unstoppable Marvel Studios takeover of the world is probably the most amusing film the company has made since the Kevin Feige reign began a decade ago.

There's no getting away from the fact that Ant-Man And The Wasp, as fun as it is, lacks the sheer, mind-blowing heft of Infinity War... In this new era of Marvel over-achievement, it really does feel like a lesser work.

Ant-Man and the Wasp 3D / Trailers