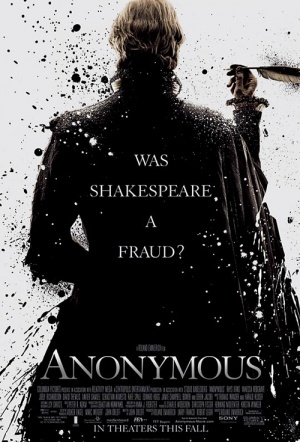 Roland Emmerich, best known for his disaster movies such as Independence Day and Godzilla, makes an about turn with this historical drama based the controversial debate: who was the author of the plays credited to William Shakespeare? A hot topic amongst experts and scholars for decades, Anonymous proposes one possibility - that it was Edward De Vere, Earl of Oxford (Rhys Ifans). The drama is set against the politics of the day and the succession of Queen Elizabeth I.

Ifans told MTV: "It's a story that asks the question and goes a long way to answering it: the theory, conspiracy theory if you like, that William Shakespeare was not necessarily the author of all, if any, of his works. So it will put a glorious [wrench] in... the English-speaking world of academia, which I have always endeavored to do, since I was a schoolchild."

Techheads may be interested to know that this is the first major full-length motion picture to be shot with the Arri ALEXA high-definition digital-video camera.

All of that makes Anonymous a splendid experience: the dialogue, the acting, the depiction of London, the lust, jealousy and intrigue.

The movie is glorious fun even as it grows increasingly implausible.

There's fun to be had here if you look hard enough.

It’s as dull as it is brainless...