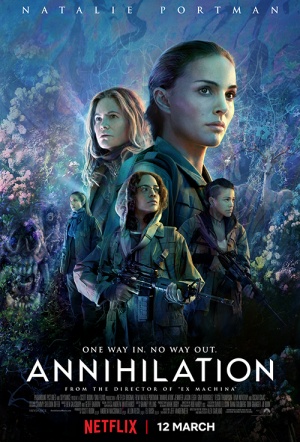 Natalie Portman is a biologist who signs up for a dangerous, secret expedition into a mysterious zone where the laws of nature don't apply. From writer-director Alex Garland (Ex Machina).

Lena, a biologist and former soldier, joins a mission to uncover what happened to her husband inside Area X - a sinister and mysterious phenomenon that is expanding across the American coastline. Once inside, the expedition discovers a world of mutated landscape and creatures, as dangerous as it is beautiful, that threatens both their lives and their sanity.

Alex Garland’s sci-fi Annihilation arrives with a ton of anticipation, deflated somewhat by being consigned to Netflix and forcing its psychedelic, mind-bending, components onto a smaller screen than ideal. To some, the film’s dismissal by producer David Ellison as “too intellectual” and “too complicated” for commercial success was just another factor in its attractiveness. While generating an eye roll at the time, Ellison was probably right as Annihilation veers closer to Andrei Tarkovsky’s Stalker than it does the likes of Predator or Alien - though it's not as much of a slog and has often stunning composition and special effects as opposed to, say, wind blowing some grass (see also: The Happening).

For those willing to put in the effort, "Annihilation" achieves that rare feat of great genre cinema, where we are not merely thrilled ... but also feel as if our minds have been expanded ...

Garland's creeping pace lulls you on an almost molecular level; he's made something akin to an end-of-the-world film, but one in which the changes afoot might not be wholly bad, title be damned.

Mr. Garland has a talent for unnerving you with quietly dissonant notes and an occasional grotesque flourish.

Annihilation is more than mere visuals and it will shock, fascinate and haunt whatever screen it's watched on.

Annihilation is the thrilling, smart science-fiction movie you need in your life and, thanks to Netflix, on your own screen, right now.

Alex Garland's bracing brainteaser has the courage of its own ambiguity. You work out the answers in your own head, in your own time, in your own dreams, where the best sci-fi puzzles leave things. Get ready to be rocked.

Annihilation is the big screen experience of the year.

Writer-director Alex Garland has made an atom bomb of a movie, fiery and all-consuming and quite unnatural. It fills every inch of our heads with its beautiful terrors.

It gives itself, and the audience, an awful lot to see.

Annihilation is a ferocious, feral, female-centric update of fearsome monster classics like The Thing and Alien.

Like all the best horror, Annihilation is steeped in character, mood, and ideas.