And Soon the Darkness 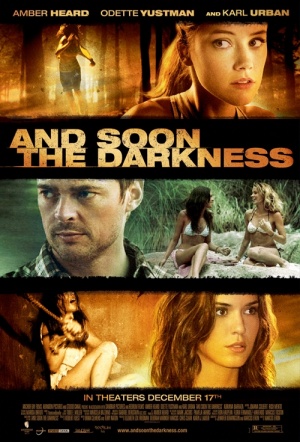 Horror about two young American women, Stephanie (Zombieland's Amber Heard) and Ellie (Cloverfield's Odette Yustman), on vacation in a remote part of Argentina. After a night out bar-hopping, the pair get into a fight and they split up. In the morning, Stephanie returns to find Ellie missing - there's signs of a struggle and the worst is feared. Finding no help from the authorities, Stephanie turns to Michael (Kiwi Karl Urban), an American ex-pat staying at the same hotel. Frantically searching for Ellie before night falls, Stephanie begins to realise trusting Michael's seemingly good intentions may drag her farther from the truth...

This is a remake of a 1970 British thriller of the same name, about two Brits  travelling in France.