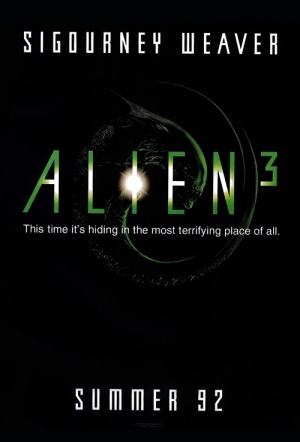 Ejected from the Sulaco spaceship in Cameron's Aliens, Ripley (the inimitable Sigourney Weaver) crashes into a penal colony planet. Contending with the murderers and rapists may seem a welcome break for Ripley, but the savage alien life form is soon stalking her again having arrived unknowingly attached to her escape craft. Finding its way to a feral dog, the alien is able to breed and renew its killing spree.

Alien 3 was a troubled production. Various filmmakers where attached, famously including New Zealand's Vincent Ward (who developed a version which ultimately fell through - named by Time magazine as one of the 'Greatest Sci Fi Films Never Made'). Ward retains a story credit.

Belongs to that branch of fantasy comics, best exemplified by the Road Warrior movies, in which the iron and space ages meet for dizzy results.

With the raising of the stakes between the first two films and coming after Cameron’s all-out war with hundreds of monsters, it is now hard to get too scared by the spectacle of one lone dog-shaped alien on the loose.