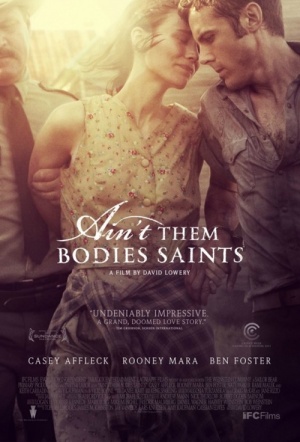 Casey Affleck and Rooney Mara are outlaw lovers in this Sundance-winning drama, set in 1970s Texas. After the pair are embroiled in a shootout with the law that ends with a policeman dead, Bob (Affleck) takes the rap and is sent to prison. Months into his sentence, Bob learns Ruth (Mara) is pregnant. Years later, after five failed attempts, he breaks out of jail and sets out to reunite with his wife and daughter.

Slow as molasses but every bit as rich.

Lowery’s understated authority lifts his tragic romance above mere Malick mimicry, while Affleck and Mara bring heart to the scrupulous artistry. All you need is a little patience...

‘Bodies’ gets under your skin and stays there. And the gospel handclapping soundtrack feels like it’s drawing you into a dream.

The film is so singular, it's hard to place. At times, its elegiac visual quality evokes Terrence Malick, but Lowery's scripting is tighter and more accessible. His is truly a fresh voice, exhilarating to hear.

While virtually every shot looks like a work of art, much of the beauty of Ain’t Them Bodies Saints comes from Lowery’s refusal to choose sides.

For all its derivative poetics -- as many exteriors as possible were shot during or just after magic hour, a la Malick -- the film is a lovely thing to experience and possesses a measure of real power.