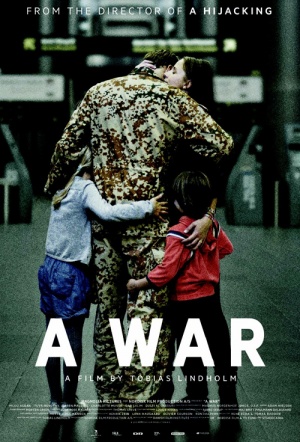 Director Tobias Lindholm re-teams with A Hijacking lead Pilou Asbæk (TV's Borgen) for this tale of Danish troops in Afghanistan, and the choices they make that follow them home from the battlefield. Nominated for Best Foreign Language Film at the 2016 Academy Awards.

With his company under heavy fire, commander Claus Pedersen (Asbæk) calls in an urgent airstrike to save his men. Sent back to Denmark shortly afterward, Pedersen finds himself charged with the killing of eleven civilians in the ensuing bombardment. The court case that follows will place great strain on the commander, his comrades, and his young family.

Doesn’t seek to break new ground in the ongoing cinematic investigation of the Afghanistan conflict; rather, it scrutinizes the ground on which it stands with consummate sensitivity and detail.

In its own restrained way, this drama packs an emotional punch.

That A War both delivers the results one might wish for and denies a sense of closure is not a failing but its chief virtue.

Does something brave and challenging in making its most sympathetic character responsible for the worst thing that happens in it.

Lindholm here makes yet another modestly scaled but effective drama that asks more uncomfortable questions than it answers.

It’s a riveting, complex film that asks one simple question: what do you do when there’s no right answer?