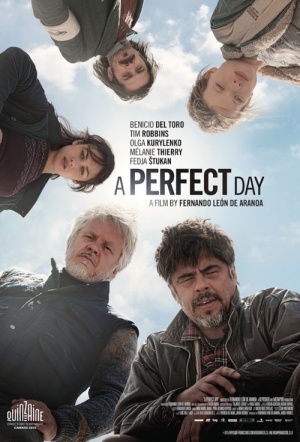 Black comedy, set during the Bosnian conflict, starring Benicio del Toro and Tim Robbins as two aid workers trying to get on with their work in the face of war-time bureaucracy, corruption and cultural misunderstandings. This is the English-language debut from Spanish director Fernando León de Aranoa.

"It's somewhere in the Balkans toward the end of the mid-90s conflict, and two veteran aid workers played by Benicio del Toro and Tim Robbins, have been instructed to remove an oversized corpse from a well in a remote mountain village. They must work quickly before the water supply becomes contaminated, however obtaining the required rope is virtually impossible.

Despite the appreciably restrained, low-key approach, the character-driven humor never finds a proper groove in what amounts to a so-so retread of earlier mid-conflict comedies like “MASH”.

There's not much of a story, which wouldn't be bad if there was something other than blasts of music filling the longueurs.

Inconsistency is A Perfect Day's biggest problem. The script is scalpel sharp in some places, flabby as the well-blocker in others.

A story that for all its motley-band-of-brothers clichés feels as authentic as many more pious takes on the Bosnian conflict.

While it's uneven... builds to a nice melancholy conclusion.

Makes a powerful statement on war by disregarding the violence and focusing solely on the strength of regular people in extreme circumstances.