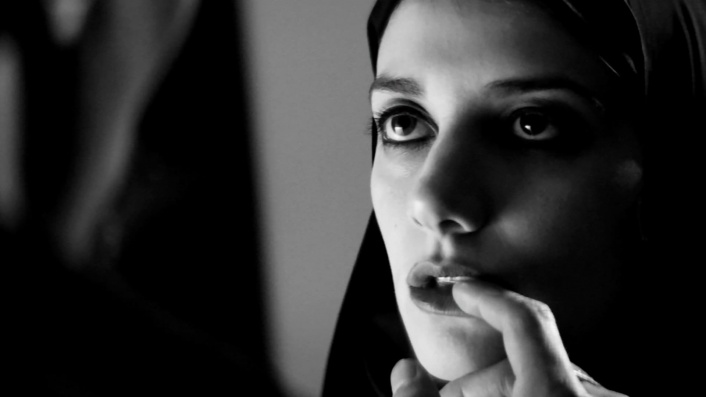 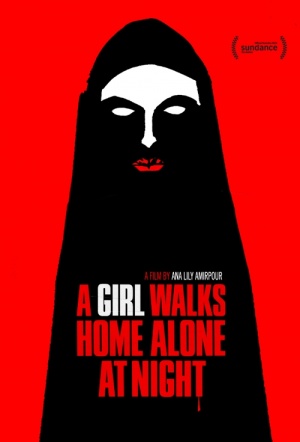 Persian-language vampire romance, the feature debut from American rising indie auteur Ana Lily Amirpour. Says Variety: "No film that revels in extended shots of a poker-faced, hijab-clad Nosferata cruising the streets for blood on a slow-rolling skateboard can be said to be playing things entirely straight."

Set in an imaginary Iranian underworld, a ghost-town named Bad City - a place that reeks of death and loneliness and where pimps, thugs and drug lords rule the streets. The townspeople are unaware they are being stalked by a lone female vampire.

A sly, slinky creeper... feature spices its genre stew with elements of Lynchian neo-noir and even spaghetti Western, but the film’s pointed, contemporary gender politics are very much its own.

Equally cool and cruel, stuffed with subtext, this 'Iranian fairytale' weaves its spell to a flip, hip ending. Amirpour is one to watch.

This film is just occasionally a bit too cool for school - but mostly just cool enough, which is very cool.

Like a mosaic of shimmering fragments that do not compose a bigger picture, Ana Lily Amirpour's debut feature brims with stylised qualities that have been prioritised over story and characters.

This moody and gorgeous film is finally more about atmosphere and emotions than narrative -- and none the worse for it.

A delectable, atmospheric creation, a lush dreamscape that we fall into, captivated and elevated.

By turns funny, vaguely creepy and too cool for school, A Girl Walks Home Alone At Night is certainly unusual - but also seductive and strange enough to stick in the memory like a fever dream.