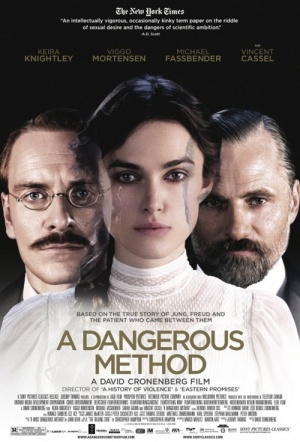 David Cronenberg (A History of Violence) directs this true drama based on the turbulent love triangle that developed between two towering intellectuals of our age - Sigmund Freud (Viggo Mortensen) and protege Carl Jung (Michael Fassbender) - and a troubled patient (Kiera Knightley).

Based on the play The Talking Cure by Christopher Hampton, which was based on the nonfiction novel A Most Dangerous Method by John Kerr.

The most compelling scenes are those between Mortensen and Fassbender, while Knightley gives a fair performance but lumbers herself with a distracting accent, and her gurning in the early scenes may be too much for some to bear.

Instead we get Knightley, who juts her chin, quakes, shakes and bugs her eyes, but nothing about her pain calls out to us, because nothing in it seems real.

The actors give it their all, especially Knightley, whose jaw- jutting, heavily accented and unfairly criticized portrayal gives the film its fighting spirit.

Using a dialogue-heavy approach that's unusual for Cronenberg, his film is skilled at the way it weaves theory with the inner lives of its characters. We are learning, yet never feel we're being taught.

In the movie's final shot, Jung's confidence crumbles and he looks supremely troubled, still uncertain of a world he once believed could be explained with textual prowess. Better than any analysis, his expression sums up the dangerous method at the heart of every Cronenberg movie.

Precise, lucid and thrillingly disciplined, this story of boundary-testing in the early days of psychoanalysis is brought to vivid life by the outstanding lead performances of Keira Knightley, Viggo Mortensen and Michael Fassbender.

Despite a top-notch cast performing well, and bravely in the case of Knightley, this is an austere, somewhat repressed movie. It never really gets under the skin in the way Cronenberg does at his best.

Spielrein's name is less familiar than the others, but the film suggests she deserves to be more than a footnote in the history of psychoanalysis.