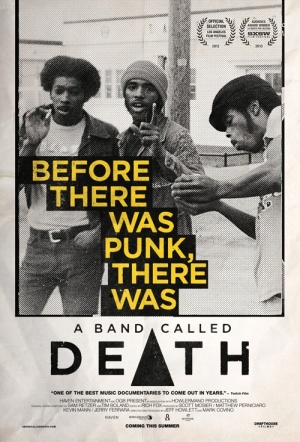 Documentary on little-known musical pioneers Death, the first black punk band and perhaps the first punk band ever. Death's members were three African-American brothers who, in early 1970s Detroit, came up with a style of hard rock that predated the wave of acts to come later that decade.

Inspired first by the Beatles and then by Alice Cooper, the Hackney brothers played shows around Michigan and released a single, as well as recording a slew of demos. But their brand of garage rock was out of step with record companies of the time and their songs were never widely heard. That is until a demo tape from 1974 was discovered and reissued in 2009 which found acclaim and, finally, an audience.

"After years of silence, Death’s moment finally arrived following unexpected demand from rabid internet fans and record collectors which ushered renowned appreciation and a swarm of national media attention that has now secured their place in the annals of rock history." (SXSW Festival)