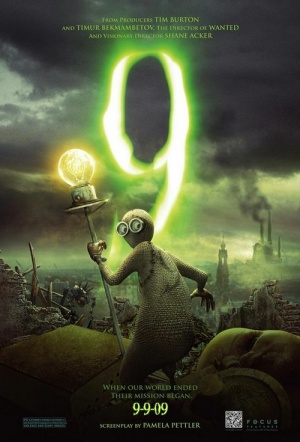 9 is a pet-project of up-and-coming director Shane Acker that is sure to be as personal as it is technically impressive. Based on his Oscar nominated short-film, it's set in a post-apocalyptic world devoid of humans, but there the similarities to Wall-E end. Produced by Tim Burton and Timur Bekmambetov – the man responsible for vampire fantasy Night Watch – the film oozes techno chic in each of its animated frames.

When 9 (voiced by Elijah Wood) meets a group of rag-doll creatures similar to himself, he discovers he is a natural leader. He offers assistance to his new companions, helping to defend them from a harsh, futuristic environment of garish insect-like beings. The voice cast also includes John C. Reilly, Martin Landau and Crispin Glover.

Design aspects are arresting and the filmmaker's abilities are obvious, but the basic survival story remains slight, just as the general setting, no matter how artfully imagined, is by now pretty familiar.

Great material, credible producers, top voice talent and gorgeous visuals, stitched together to make a patchwork that’s less than the sum of its parts. Striking and ambitious, but worn at the seams.

Every effort to expand the range of feature-length animation beyond the confines of cautious family fare is to be welcomed, and budding techno and fantasy geeks are likely to be intrigued and enthralled.

Now, like post-­apocalyptic wombles or borrowers, the mites scurry and scamper about the wrecked landscape in a manner that I can only describe as uninteresting.

The best reason to see it is simply because of the creativity of its visuals. They're entrancing.

9 began life as a short film, winning creator Shane Acker, then a student at the University of California, a Student Academy Award for animation. Now, with the support of film-makers Tim Burton (Alice in Wonderland, The Corpse Bride) and Timur Bekmambetov (Nightwatch) as producers, Acker's turned his post-apocalyptic adventure into a full length feature for sci-fi loving adults.

9 never adds up to much. It's a dark adult film that gives itself over to the chases and frights of a kiddie movie.