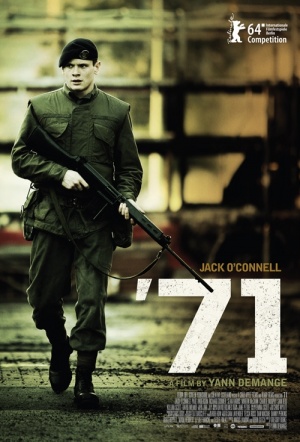 Jack O’Connell (Starred Up) leads this war drama as a young British soldier, left in a daze when his unit accidentally abandons him on the hectic streets of Belfast at the height of the Troubles. Co-stars Sam Reid (Belle), Sean Harris (Prometheus) and Charlie Murphy (Philomena). Winner of Best Director at the 2014 British Independent Film Awards.

"1971, and the conflict in Northern Ireland is escalating towards civil war. Young English recruit Gary is called into action in Belfast. The situation in the city is confusing and challenging – even for experienced military commanders. The town is divided into ‘loyal’ Protestant and ‘hostile’ Catholic areas. Both parties have paramilitary units; in addition, radical street gangs and undercover agents from all sides are trying to assert their interests on their own initiative.

"During a patrol, the soldiers become embroiled in a scuffle and one of them loses their weapon. Gary and a fellow soldier follow the thief who disappears into the crowd. Suddenly Gary is having to fend for himself alone in the midst of enemy territory. His journey back to his base that night is an odyssey filled with uncertainty, fear and desperation." (Berlin Film Festival)

Over the past few years, Jack O'Connell has proved himself one of Britain's most unnerving screen presences. From a teenage thug-in-the-making in Shane Meadows' This Is England, to the banal face of preening, petrifying evil in hoodie horror Eden Lake, to an institutionalised killer in prison drama Starred Up, he's cornered the market in sneering psychopaths.

A vivid, shivery survival thriller that turns the red-brick residential streets of Belfast into a war zone of unconscionable peril.

A brutal army thriller that feels like the truth, thanks to take-no-prisoners storytelling and a tell-no-lies performance from Jack O’Connell.

Demange is a strong storyteller and masks the script’s tendency to nod to every opinion and social division by offering a masterclass in tension as soon as his dramatic bomb starts ticking.

The complex choreography... is a thing of joy.

It's a film that holds you in a vice-like grip throughout; only wavering towards the end with a faintly preposterous climactic shootout.

A master class in structure, a meticulously constructed period piece, a powerful anti-war film, and rarest of all, a thriller whose tension and suspense feel genuinely earned.

This is a tense, gripping thriller that combines real-world relevance with high-concept entertainment. In a superb ensemble, O’Connell is outstanding