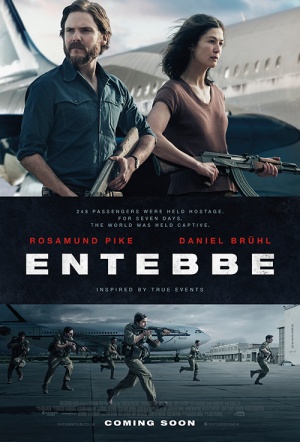 In 1976, four hijackers took a plane hostage and forced it to land in Entebbe, Uganda, while they demanded the release of dozens of Palestinian terrorists. The ticking-clock thriller follows the hijackers and hostages as well as the political leaders trying to decide whether to negotiate or send an elite special forces unit on a dramatic rescue mission to free the hostages.

Remains on the ground throughout.

It's strong stuff. And then it all goes down the drain.

The film gestures toward relevance without finding a coherent historical or political point of view.

"Surprise and speed is the key," someone comments at one point; the only surprise is how unspeedy and unsurprising this project turned out to be.

Although much of the film is effectively claustrophobic, it is too bogged down by exposition to fully take off.

Like the hijacking itself, you can't help feeling it was all for nothing.