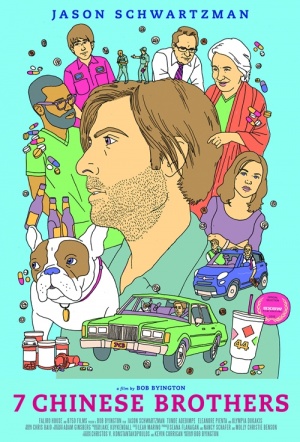 "The only bright spot is probably his boss, Lupe (Eleanore Pienta). Will Larry keep it together long enough to win the girl, provide for his French bulldog (Schwartzman's real-life dog Arrow), laze about with his friend Major (Adebimpe), and do his cantankerous grandmother (Olympia Dukakis) proud?" (SXSW Festival)

By widening his soulful puppy eyes - matched only, quite eerily, by those of his French bulldog in real life, Arrow - Schwartzman successfully dares audiences to care.

Schwartzman smarms his way through Bob Byington's very funny 7 Chinese Brothers as if the pic had been drawn up especially for him.

There's absolutely nothing novel about a "loser gets it together" arc ... But for those who just want to see Schwartzman be Schwartzman for an hour or so, 7 Chinese Brothers delivers the goods.