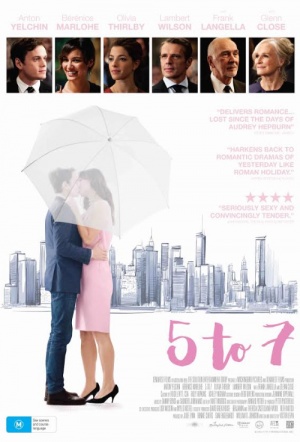 Anton Yelchin is an aspiring novelist who embarks on a May-September affair with a beautiful French diplomat's wife (Bérénice Marlohe) in this elegant romantic comedy. Directorial debut from Victor Levin, a writer-producer most famous for his work on Paul Reiser and Helen Hunt's 1990s sitcom Mad About You.

"Outside the Manhattan St. Regis Hotel, aspiring young writer Brian first meets Arielle, the sophisticated wife of a French Diplomat. Though she’s older, married, and the mother of two, Brian can’t help but be drawn to her and the two begin a cinq-a-sept affair. It’s a clash with his traditional values and his parents (Frank Langella and Glenn Close) can barely handle the news, but Brian couldn’t be more smitten. As the two fall deeper in love, Brian begins to wish for more than just the hours of five to seven and soon the two must face the most significant decision of their lives." (Tribeca Film Festival)

Courageously sentimental in an age of irony... refreshingly articulate, delivers romance of the sort thought lost since the days of Audrey Hepburn, for those who appreciate such finery.

The obvious fact that its romance is doomed from the start doesn’t make the film any less fantastical.

This calculatingly adorable coming-of-age tale has its delights but feels more constructed than lived.

Although Mr. Levin tends to embrace clichés and overstatement ... he can also surprise you with delicate touches, a pained look, a wince of recognition.

Accepted as fantasy, 5 To 7 has a bright, literate charm that’s hard to resist...

An interesting directing debut that, like Brian, shows promise.

Sumptuous and romantic in an attractively old-fashioned way despite a hitch designed to give some contemporary American idealists pause... the film satisfies in a wholly commercial way.

This is an above average romantic weeper despite its classist flaws and its liberal scrounging from The French New Wave.