In 480BC around the time of the ‘Iron age’ Persian King Xerxes sent his massive army to conquer the lands of Greece. One such part of this land was the city of Sparta ruled by King Leonidas. Sparta, was a city renowned for its warriors, brave and trained to be fearless in the face of imminent doom.

Leonidas takes a stand (albeit a suicidal one) against Xerxes and leads 300 of his finest soldiers into battle in an attempt to buy time for the rest of Greece to get their act together and prepare for the Persian Invasion. This delay tactic was said to be one of the most famous last stands in history and a testament to the training, dedication, skill, fearlessness and valour of the Spartans. It has also been said that the battle, which followed between the Greeks and the Persians, led the way to modern day democracy.
All of the historical details aside we have to remember this film was based on a graphic novel not a textbook. Therefore, it becomes a huge and magnificent spectacle for us to digest.

However, I have to say, this has been done before, again and again and again. From, Braveheart, Gladiator, Troy and Lord of the Rings we have all witnessed the cinematic event of the massive armies screaming for the enemy ready to tear them to shreds. However, in the story of ‘300’ the Spartans are vastly outnumbered and although their starting tactics allowed them to brutally overwhelm the front lines of the Persians they were on their way to death, they knew it and so did we. Thus, the computer generated effects although perhaps a little second-hand did justice to the horrific prospect the Spartans faced in their attempt to hold off the Persians.

Bloodbaths, carnage, gore, beheading and maiming are the main meal of the battle scenes which are definitely not to be viewed by the weak at heart. A man’s movie I hear you cry?? Maybe, but I wonder how many of those testosterone fuelled men growling about how magnificently gruesome the fight scenes were, noticed the truly homoerotic connotations of 300. The attempt to conceal this by the gratuitous female nudity failed miserably and what was left was a demi god (Xerxes) straight off a mardis gras float fighting 300 extremely buff, deliciously half naked men. So, ladies if your partner is desperate to take you to the movies for this one and you are not keen, you should be! This film is as much for the girls as it is the boys intentionally or not…

Overall, the concept and choice of cast is nowhere near as charismatic as the film interpretation of Frank Millers ‘Sin City’ but its steely grace, just like the Spartan Warriors keeps you mesmerised through to the end. Instead of waiting for the DVD, do see this at the cinema as a small screen would do no justice to the enormity of the story and the vision of 300. Plus, the men…oh the men…
0 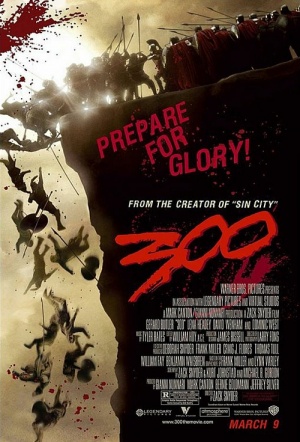