The movie itself, is a pretty amazing film. Danny Boyle (Trainspotting, 28 Days Later) had taken a lot of time to draw the audience into the story and feel the frustration, self hatred, self loathing as well as the utter boredom of being trapped in that little rock crevice.

And since the movie is at it's absolute core a one man show, James Franco's (Freaks & Geeks, Pineapple Express) performance helped to suck the audience in and make what could have been a really long boring movie about a guy and his pet rock into a pretty harrowing film. Although there is one questionable scene where Aron is gettin a little too friendly with himself and gets a little hands on with the boulder trapping his hand.... that kind of threw me for a second. And can I just say, out of all of Franco's work, this movie has really proven that he is an amazing actor, and not just some stoner pretty-boy. The movie gets a solid 5/5 from me.

However, I couldn't help but be annoyed by the film... Not for anything the director or actors did, but just because of the storyline in general. What idiot doesn't leave a note, or tell someone where they are going!!!!! How dumb do you have to be for this not to cross your mind at some point?! 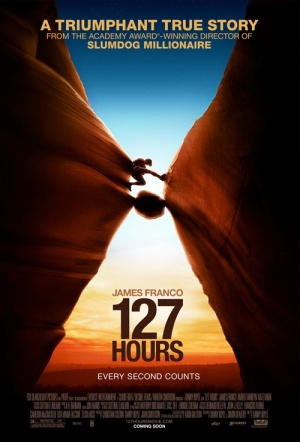